A famous comedian actor is having a concert on selected places.  Andrew Clay start on being a comedian on different sitcom. He is famous in impersonating John Travolta and Jerry Lewis. Andrew Clay also cast on many movies where he discover as an actor. 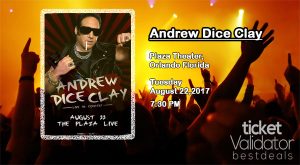 Andrew Dice Clay is holding a Live Concert in Orlando Florida on August 22, 2017. One of his concert tour for the year 2017. The All-time prominence comedian-actor will blow your night at The Plaze Live, Orlando Florida.  Released a numerous best-selling DVD’s and series of multi-gold and platinum selling CD’s.

Andrew Dice Clay is one of the America’s prominence comedian-actor and most controversial and outrageous comics known as “The Diceman”. First Comedian to sell out Madison Square Garden  two night in a row in 1990. He started and audition at Pips in 1978 as an actor comedian known as “Andrew Clay”. He is popular on his works at impersonating John Travolta and Jerry Lewis. Because of his character played on Buddy Love,  and known as “The Dice Man”. Andrew Dice Clay was adapted by the Owner of a Famed Comedy Store in Los Angeles in 1980.

Andrew Dice Clay works on a different sitcom and appears on M*A*S*H and Diff’rent Strokes and later doing movie roles. A regular role on Crime Story from 1986 to 1988 where he turned from acting to pursue a stand-up comedy. The Big break of Andrew Dice Clay is in 1988 where he did a seven-minute set in a comedy club named Dangerfield’s. Then, he met his agent Dennis Arfa, who led to his first HBO special and the starring role of the film The Adventures of Ford Fairlane in 1990. Andrew Clay have been in controversy. He banned from many radio and television shows for his explicit language and sexist humor.  In 2011, MTV banned him for life, because of reciting “adult nursery rhymes” during the 1989 MTV Video Music Awards.

On August 22, 2017, Andrew Clay will be having a Live Concerts at The Plaza Live in Orldando, Florida as his Concert Tour in 2017.