First time collaboration of the two famous band in world, Lifehouse and Switchfoot. In many years that the two band start their music career, finally they held a concert tour in a selected places. This coming August 26, 2017 at the Orlando Amphitheater at the Central  Florida Fair will be the most awaited collaboration of Lifehouse and Switchfoot. 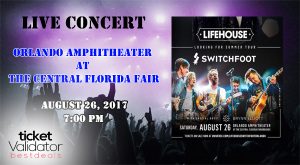 Lifehouse a band from Los Angeles broke a big way to fame when one of their song “Hanging by a Moment” spent 20 weeks in Top-ten and won a Billboard Music Award for “Hot 100 Single of the Year”. Since then, Lifehouse rose to fame and get the attention of the people around the world. From that, the band released six more albums, where three of it made to the Billboard Top-ten, and sold over 15 million records worldwide. The most popular song that hit the attentions of people are “You and Me”, “First Time”, “Whatever It Takes”,” Broken” and many more. Debuted at #1 on the independent album charts in 2015.

On the other Hand, Switchfoot is from San Diego formed in 1996. Since the start of their journey in music industry, Switchfoot sold over 5.7 million copies of their first nine studio albums wordlwide. Rank up string of Alternative Radio and performed a sold-out tour with over 4 million concert tickets worldwide. Further than their successful career in music industry, Switchfoot been active in variety of Philanthropic efforts, raising over a million dollar to Bro-Am Foundation. Aiding kids on their community and providing services to underprivileged and disadvantages. Swicthfoot also have a deep commitment of humanitarian causes such as CURE International, DATA, The One Campaign and Habitat for Humanity.