The King and I

Another piece of Richard Rogers and Oscar Hammerstein II is presenting in the theater world “The King and I”. A story that based on the novel Anna and the King of Siam by Margaret Landon (1944). Where the story is derived from the memoirs of Anna Leonowens, governess. The musical team will lead by Richard Rodgers and dramatist will be led by Oscar Hammerstein II. 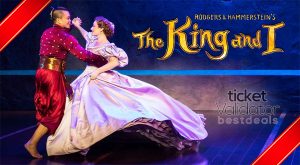 The musical’s plot related to the experience of Anna. A British school teacher hired by the King as part to drive in modernize his country. The relationship between the King and Anna is marked by conflict was determined in the piece.

Mongkut became the king after his half-brother died. Before he became a King he had lived half of his life as a Buddhist monk and acquire an ascetic lifestyle of Western languages and firm grasp as well. He succeeded in keeping Siam as an independent nation by familiarizing the Western ways together with his heirs and harem. He then asking a help from a Singapore agent, Tan Kim Ching, to find him a British lady to be a governess to the royal children. The choice fell on Anna Leonowens who recently arrives there. Anna is running a small nursery school in the colony. She is a daughter of an Indian Army soldier and window of Thomas Owens. Anna and Thomas had 2 sibling Avis and Louis.

King Mongkut and Leonowens agreed in $100 per month and a residence near the royal palace, as a teacher to teach King Mongkut children and his wives. Leonowens together with her son Louis temporarily lived as a guest of Mongkut’s prime minister. Furthermore, Leonowens took a six-month leave to visit her daughter Avis in England where she sent it to school to give social advantage of prestigious British education. She plan to return to Siam with Avis after intending Louis at a school in Ireland. But due to unexpected delays and opportunities, she was still in abroad and can’t return back for the meantime. When she know that Mongkut fell ill and died, Leonowens did not return to Siam, although she continued to correspond to her former pupil, Chulalongkorn the new king.

Now, “The King and I” is going to be a musical as the piece of Richard Rodgers and Oscar Hammerstein II. They will perform in selected places including Orlando Florida. They will have a 8 shows in the month of September at the DR. Phillips Center Walt Disney Theater in Orlando Florida.

The King and I schedule shows: Live Events

Tickets are available with a discounted price. Visit our website: www.validtickets.com